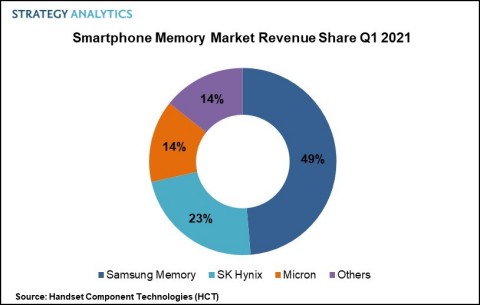 In Q1 2021, the smartphone NAND flash market witnessed 18% y-o-y growth in revenues driven by the adoption of UFS NAND flash chips, especially in mid and high-tier devices. Samsung claimed the top spot with a revenue share of 42% followed by Hynix with 20 percent and Kioxia with 19% share.

The smartphone DRAM memory chip revenue observed an annual revenue growth of 21% in the quarter owing to the increase in new 5G device launches by smartphone customers. Samsung Memory led in terms of market share, capturing a revenue share of 54% followed by Hynix and Micron each having 25% and 20%.

“Memory vendors are expected to cater to the 5G demand with the introduction of high capacity UFS 3.1 and LPDDR5 Multi Chip Package memory solutions,” says SA’s Stephen Entwistle “however, the ongoing non-memory component shortages could dampen the memory market prospects.”