Enclustra recently introduced two modules, Andromeda XZU90 SoM and Mercury+ XU6, capable of running Linux. Today’s focus will be on the Mercury+ XU6 that is built around the Xilinx Zynq UltraScale+ MPSoC that is an ultra-compact package with integrated H.264 / H.265 video codec. The hardware Mercury+ XU6 system on module comes into the light with only measuring 65 x 54mm supporting UltraScale+ models with up to 256K logic cells. 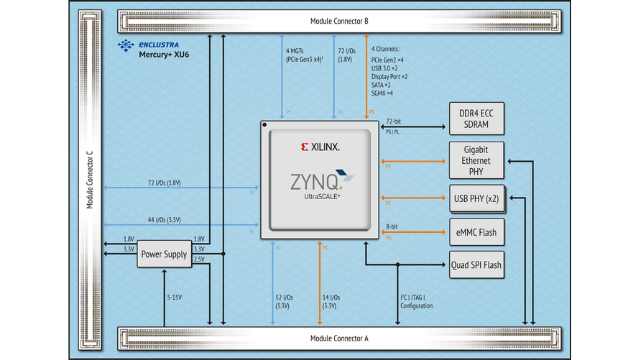 When we talk about any system on module, it requires a carrier board where it can be plugged or soldered. The manufacturer comes with two baseboards that support Mercury+ modules. The first Mercury+ PE1 has IO interfaces for almost every application and has three variants for building custom FPGA and SoC-based hardware.

The Mercury+ ST1 carrier board is designed for rapid prototyping and for building FPGA systems. For those looking to buy the Mercury+ XU6 module for the video codec and implement it in a video-based application, this Mercury+ ST1 baseboard is well suited for such applications due to its wide range of I/O interfaces.

Enclustra also unveiled the Andromeda XZU90 SoM, but it is still under development and is designed for high-end applications. For a single unit, the Mercury+ XU6 is priced in the range of $299.00 to $1134.00, depending on the variant. More details on the hardware specifications are available on the official product page.