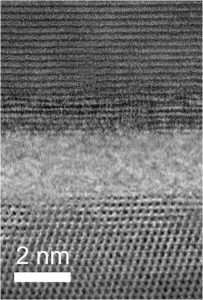 At the same time they built similar chips with diamond and silicon carbide heat spreaders.

The diamond and SiC circuits had hotspots at around 137°C and 167°C respectively, according to the university, while those in the BAs-cooled chip reached only 87°C.

“These results clearly show that boron-arsenide devices can sustain much higher operation power than processors using traditional thermal-management materials,” said researcher Yongjie Hu. “And our experiments were done under conditions where most current technologies would fail. This development represents a benchmark performance and shows great potential for applications in high-power electronics and future electronics packaging.”

GaN-on-BAs structures exhibit a thermal boundary conductance of 250MW/m2/K, according to the Nature Electronics paper ‘Integration of boron arsenide cooling substrates into gallium nitride devices’, and the team showed that boron phosphide is another promising heat spreader. The high thermal performance of BAs and BP is attributed to a unique phonon band structures and interface matching.

“When heat crosses a boundary from one material to another, there’s typically some slow-down to get into the next material,” said Hu. “The key feature in our boron arsenide material is its very low thermal-boundary resistance. This is sort of like if the heat just needs to step over a curb, versus jumping a hurdle.”

Hu’s team first identified BAs as a high-perforamnce thermal material in 2018, going on to develop defect-free substrates. “During their experiments, the researchers first illustrated the way to build a semiconductor structure using boron arsenide and then integrated the material into a HEMT-chip design. The successful demonstration opens up a path for industry adoption of the technology,” said UCLA.

The abstract of  ‘Integration of boron arsenide cooling substrates into gallium nitride devices‘ can be viewed without payment.